The  New York sessions for Bob Dylan’s 1975 album, “Blood on the Tracks,” have always been ground zero for Dylan’s reputation as a cipher and a curmudgeon in the recording studio, intent on speeding through the proceedings and capturing lightning in a bottle, quality control be damned. As the story has been told—mostly by musicians who no doubt felt that they didn’t get a fair shake during the biggest moment of their careers—Dylan started sessions for “Blood on the Tracks” on September 16, 1974, on Rosh Hashanah, with a band of New York session “cats” who couldn’t hear what Dylan was doing on songs that he hadn’t bothered to teach them. He waved them off, one by one, as the day wore on, essentially firing them before they had a chance to prove themselves. The problem is, it simply isn’t true.

As the author of the liner notes for “More Blood, More Tracks,” the latest entry in Dylan’s “Bootleg Series,” I was one of the first people to hear the raw session tapes in chronological order. I listened while perusing Dylan’s fabled “red notebook,” in which he’d written the lyrics to the ten songs on “Blood on the Tracks” in his tiny, precise scrawl. What I quickly realized turned the legend upside down: Dylan entered the studio early on the sixteenth, long before any of the session musicians had arrived, intent on cutting an acoustic album—a sort of “Freewheelin’ Bob Dylan” for the mid-seventies. Contrary to most accounts, Dylan was supremely prepared, and immediately went about delivering aching versions of some of the best—and most intimate—songs that he had ever written. In the era of Neil Young and Joni Mitchell and so many others unjustly or unfortunately dubbed “the New Dylan,” and after a clutch of albums that fans had found less than satisfying, Dylan was throwing down the gauntlet, showing himself once again to be the master singer-songwriter and performer.

By the time the musicians who’d been hired to back Dylan arrived that afternoon, he had already cut eleven songs. Dylan would record another fifteen that day—including five takes of “Idiot Wind,” alone again, save for the bassist Tony Brown—for a total of thirty-six, an epic amount by any standard. But it’s clear as you listen that instead of things getting better as the sessions progressed, with the musicians finding their groove with Dylan, the atmosphere in the room degenerated. Most interesting, while Dylan gamely puts the band through their paces on the seemingly easy blues of “Call Letter Blues” and “Meet Me in the Morning” (after attempts at “Simple Twist of Fate” failed miserably), he never lets them near what he surely senses must be his latest masterpiece: “Tangled Up in Blue.” And so, on the afternoon of September 17th, Dylan steps up to the microphone and delivers a hushed, intense, and powerfully intimate version of that song, accompanied only by Brown on bass.

Audio: Take one of “Tangled Up in Blue.”

There’s a plaintiveness in that very first version of “Tangled Up in Blue” that’s unusual. It’s the earliest version we have of the now-familiar tale—of the star-crossed couple and their travels and travails, that jumps from the first to third person and back again—and while Dylan doesn’t necessarily sound tentative, the way he often did on “The Cutting Edge: 1965-1966,” the “Bootleg Series” entry that chronicled his “thin wild mercury music” years, he does seem more vulnerable than he ever had before, or ever would be again. “There’s a lot of honesty there,” Jeff Burger, the author of “Dylan on Dylan,” said. “It’s raw and heartfelt, with less posing than he’d done on some of his earlier songs. Of course, many great songs had come before, like ‘Desolation Row’ and so many others, but he was showing off his way with words and painting a picture of another world, not necessarily telling a whole lot about himself. But here he really gets down to the personal, even if it isn’t completely direct.”

While he was writing the songs for “Blood on the Tracks,” Dylan had taken up painting classes with the New York artist Norman Raeben. By all accounts, Raeben was a taskmaster, but he imparted in his students a sense both that life itself was the art, with their creations being merely the by-product of that experience, and, significantly for Dylan, that past, present, and future could all coexist in their work. “He put my mind and my hand and my eye together, in a way that allowed me to do consciously what I unconsciously felt,” Dylan told Rolling Stone in 1978, of Raeben’s influence on his songwriting approach.

While Dylan is known to endlessly and brutally edit his lyrics until the very last minute in the studio, and the epic “Idiot Wind” transformed in the course of the “Blood on the Tracks” sessions, “Tangled Up in Blue” is the one song in Dylan’s vast catalogue that he has never seemed to be finished with. There are eight takes from the New York sessions, and the slightest lyrical change, shift in tempo, or variation in delivery causes the song to reveal itself in unexpected ways. When Dylan launches into take two of the song, it’s bouncy, with punchy vocals and organ flourishes, making it, already, a different tale altogether. Further takes seem to split the difference between dark and light. By the time Dylan and Brown attempt the song for the last time in New York, in a remarkable version recorded at the eleventh hour of those sessions, Dylan has seemingly wrung all he can out of “Tangled Up in Blue.”

Still, Dylan would revisit the song just three months later—this time in Minneapolis—in the version that we would all come to love and obsess over. His voice was already transformed, more akin to the carnival-barker delivery that he’d employ on 1975’s “Desire” and the Rolling Thunder Review tour. The version Dylan performed less than a year later on that tour was yet again vastly reworked, and he would continue tinkering with it over the years. A decade later, in 1984, on the album “Real Live,” Dylan felt he’d finally found the song he’d been looking for. “On ‘Real Live’ it is more like it should have been,” Dylan told Rolling Stone in 1985. “I was never really happy with it. I guess I was just trying to make it like a painting where you can see the different parts, but then you also see the whole of it. With that particular song, that’s what I was trying to do . . . with the concept of time, and the way the characters change from the first person to the third person, and you’re never quite sure if the third person is talking or the first person is talking. But as you look at the whole thing it really doesn’t matter. On ‘Real Live,’ the imagery is better and more the way I would have liked it than on the original recording.”

Dylan has performed “Tangled Up in Blue” 1,546 times during his Never Ending Tour, which began in 1988 and is still going. Like any good Dylan obsessive, I’ve seen many of those performances. It’s a guilty pleasure of Dylanologists to trainspot the tweaks—both large and small—that Dylan makes to the lyrics from year to year, or sometimes from night to night. Still, when I was presented with Dylan’s latest revision, written in his own hand—which is part of the “Mondo Scripto” exhibition of his art currently on display at the Halcyon Gallery in London— it was like seeing an old, dear friend, whom you know intimately, but who’s no doubt changed and grown over the years, adapting with the times. 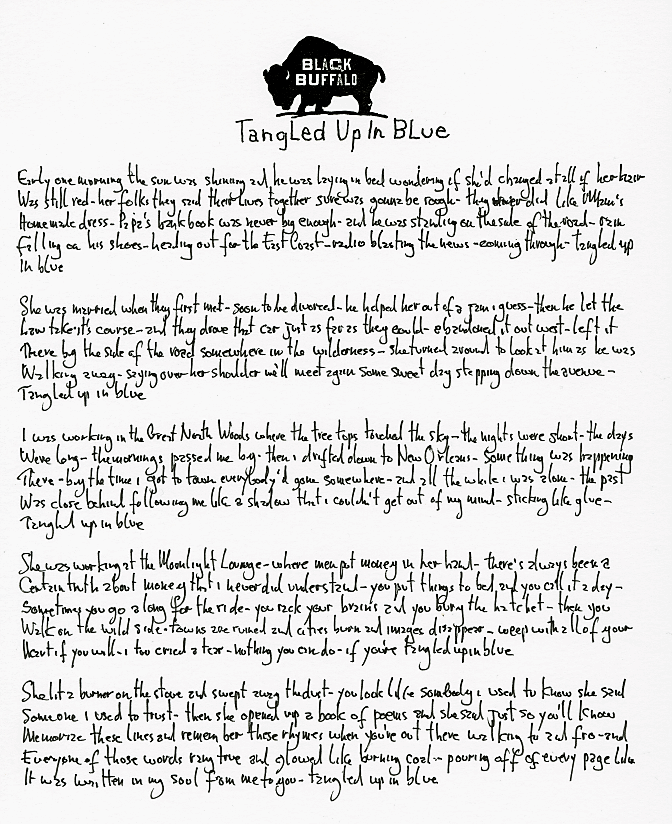 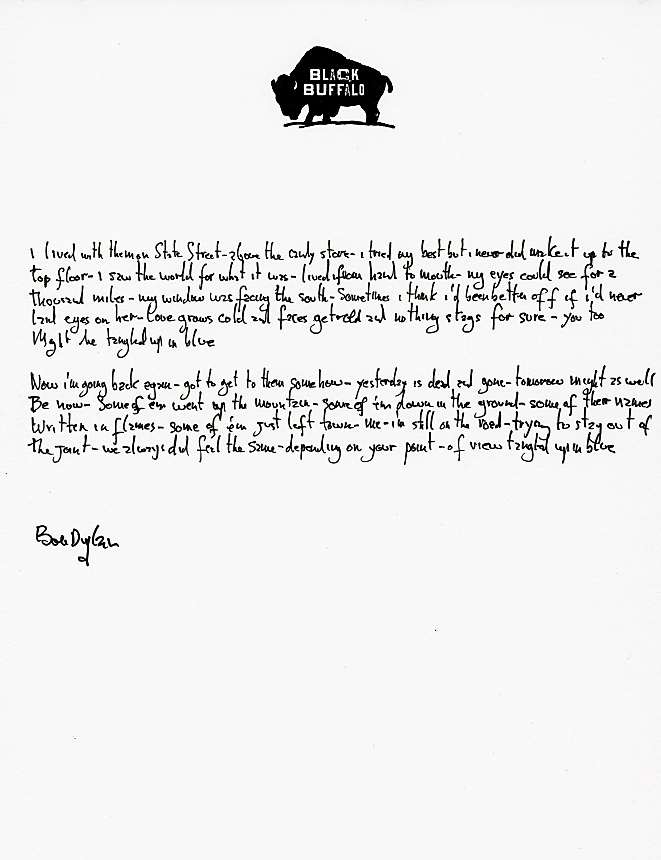 Fans who have seen Dylan in concert recently will recognize some of the changes, of how “he let the law take its course” has taken the place of using “a little too much force,” or how instead of “fishing outside Delacroix,” “everybody’d gone somewhere.” Of course, the past is still close behind, “following me like a shadow that couldn’t get out of my mind / sticking like glue / Tangled up in blue,” but she isn’t working in a topless bar anymore but at the Moonlight Lounge, “where men put money in her hand.” “There’s always been a certain truth about money that I never did understand,” this new version of Dylan’s classic tells us. “You put things to bed and you’ll call it a day / Sometimes you go along for the ride / You pick your brains and you bury the hatchet / Then you walk on the wild side / Towns are ruined and cities burns and images disappear / Weep with all of your heart if you would / I too cried a tear / Nothing you can do / If you’re tangled up in blue.” It recasts the song in the spirit of our times, in the same way the original was so much a product of the Vietnam and Watergate era.

While researching the sessions for “Blood on the Tracks,” I spoke to the writer Larry (Ratso) Sloman, who got to know Dylan around the time and has remained friends with him ever since. He told me a fascinating story of an artist who is perhaps oblivious to how seriously we all take him, but also at peace with his creative process. “I was around during the sessions for ‘Infidels,’ and I fell in love with the song ‘Blind Willie McTell,’ ” Sloman said, referring to a song that’s considered one of Dylan’s best but didn’t find a home on a release until the first volume of his “Bootleg Series,” in 1991. “When the album was finished, Bob called me up and asked me if I wanted to come over to hear it. He played it for me, but no ‘Blind Willie McTell.’ I asked him, ‘What gives, Bob? Where’s ‘Blind Willie McTell?’ And, without missing a beat, he goes, ‘It’s no big deal, Ratso. It’s just an album. I’ve made twenty-two. And I’ll make more.’ ”

Unlike, say, Paul Simon, a presenter who toils over his records, perfecting every nuance until everything is just so, Dylan is restless, visceral, mercurial, always seemingly on the way to his next creation. “More Blood, More Tracks,” and especially its centerpiece, the constantly evolving, shifting, changing “Tangled Up in Blue,” is pure Dylan, a portrait of an artist who never seems to tire of the chase.

Source: Bob Dylan’s First Day with “Tangled Up in Blue” | The New Yorker