Well, here I am in Derby in the grandest looking Wetherspoons I’ve ever been to.  I think it used to be a bank. Very impressive. Can’t decide whether to have one of their curries though. The decisions I have to make!

Derby is interesting. Never really looked around it before. The cathedral is quite boring, very Protestant, but there are some interesting plaques of eminent figures of the city’s industrial past. In fact, I didn’t realise that Derby had the first self-contained factory and is therefore at the beginning of the Industrial Revolution. Around the Silk Mill is a World Heritage Site. Quite picturesque with the River Derwent flowing past it. 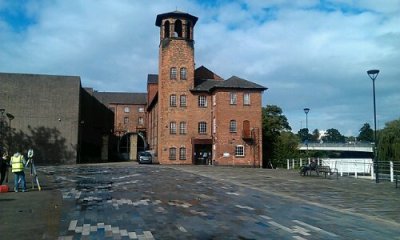 Went to the Museum & Art Gallery. There is quite a disturbing exhibition of the town’s army regiments. I didn’t realise the extent of British agression overseas. Not just the obvious ones but South America and other places I didn’t realise the British ever went to. For all the talk you hear about Free Trade, it was actually Forced Trade! It also contains information about how the military controlled riots and civil disobedience at the time of the Industrial Revolution. Frightening stuff! There is also an interesting historical connection with Bonny Prince Charlie and the Jacobite rebellion where local troups were used to repel them. Thought that was just going on in Scotland. Me? I’m on the side of Charlie!! And the workers!!

The art gallery is quite limited but there is a good exhibition of Joseph Wright. His paintings exhibit great technique but really just pander to the status quo. Some interesting portraits of the Arkwright family who were the arch capitalists of the 18th/19th Centuries. It’s interesting, like the de Medici’s of Florence, people from humble backgrounds who achieve great wealth need to immortalise themselves in works of art. Joseph Wright is no Leonardo Da Vinci though!

I like Derby. Next time I’ll bring my guitar and do a bit of busking.