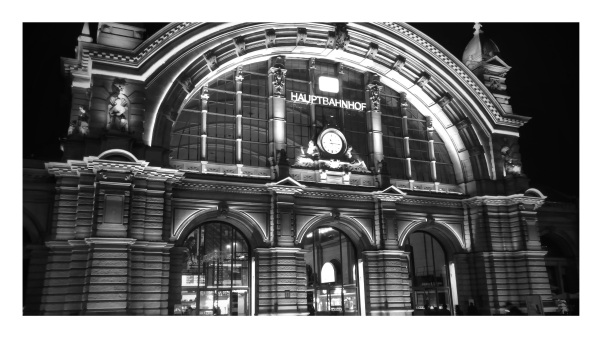 I arrived in Frankfurt at about 10.30 p.m. It was an easy run and the bus station was next to the railway station, like they are in many European cities. It makes sense. Why don’t they do that in British cities? Mind you, the bus stations have a very different atmosphere. There is a slight air of desperation with people waiting for buses, an atmosphere of uncertainty. And things happen that don’t happen elsewhere. Everyone has a story to tell!

I was a bit nervous when I arrived at Frankfurt. After my experiences with the hostel in Brussels I was afraid that things may go wrong. Also, the reviews of the hotel I was staying in were not great. There was talk of drug addicts and prostitutes hanging about outside the hotel! Well, at least they weren’t inside and, actually, it turned out to be fine! Yes, it was a slightly dodgy area but it was really close to the station and the town centre and it was clean and had a 24 hour reception which meant I wasn’t standing around for hours outside. I had a really good night’s sleep!

I didn’t know what to expect with Frankfurt. When I worked out my itinerary for the trip it was a convenient stop on the way from Brussels to Prague and it’s a place I didn’t really know anything about apart from it was where hot dogs were invented! I certainly wasn’t expecting a major festival to be happening that had taken up most of the town. I eventually found out it was a commemoration of the re-unification of Germany. Things were happening everywhere. I decided that busking was not really going to be feasible. There was noise coming from countless tents and stages. At night there was a major rock concert in the centre of town with thousands of people and a major police presence. Very exciting. Yet again, my busking plans had been thwarted (or was I just bottling out?!).

Anyway, I decided to try and rent a bike from the stands outside the station. This time I had more luck and I managed to get the pay station to accept my credit card. However, it took a long time for me to work out how to actually unlock the bike. The instructions for everything were in German and when I tried to phone the helpline the operator knew nothing about how to hire the bikes. Great helpline!! In the end I worked it out by downloading the Android phone app that was in English and I realised that hiring the bike was easier than I thought. Fantastic! I went cycling off round the city. 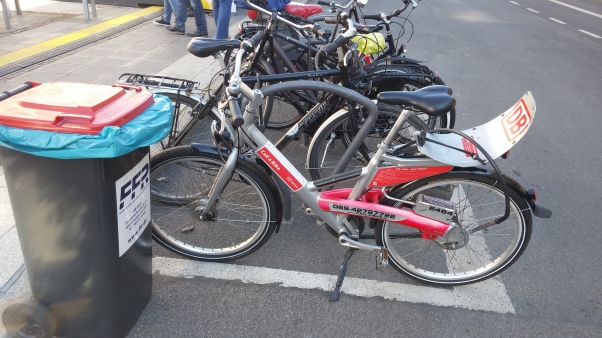 Got the bikes to work! Liberation!!

The city is interesting with a futuristic financial area full off postmodernist buildings and hipster delis. It was so nice not having to walk but still be able to get round and see everything! Bliss!! As expected, there are very few old buildings but it has a good atmosphere and it is very nice down by the river. I had an Indian meal from a market stall which wasn’t that great but it filled me up. 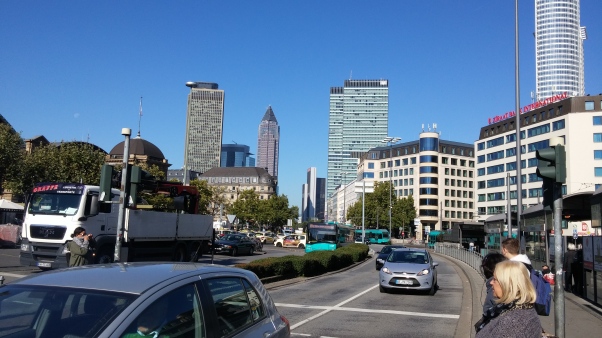 At night I had a look round for live music venues. There is a street with several jazz clubs and bars down in it and I was heading for these. I had been told about a bar called Club Voltaire that I went to but when I got there it looked a bit dull so I didn’t stay long. I also never got to the jazz clubs. On the way I came across a bike park and decided to do more biking, this time at night. Loved it! What a liberating feeling biking is! Then I went back to the hotel and watched Star Wars Episode 1 on my computer. It was better than I remember it.

Next morning I went to the bus station to get the bus to Prague, the next city on my list.The stop I wanted was down a side street. The buses are actually clean and comfortable but the bus station was a complete mess. Rubbish was everywhere. The bins were either overflowing or broken. This is not what I expected in a German city! There was also nowhere for passengers to sit and wait. I was beginning to feel like a second class citizen. It was good experience though and the other passengers were really friendly, and of course it is really cheap! You may think it’s odd me saying it’s a “good” experience but at least part of what I was doing was to see things from a different perspective, and it made me aware of how other people live and survive. It made me a part of things just by being there. There really were shades of the Jack Kerouac zeitgeist in what I was doing. I was on the outside looking in and I saw much that I haven’t seen before.

The trip from Frankfurt to Prague is really good. The scenery is wonderful and there are hundreds of miles of pristine forest. The only stop we made was at Nuremberg which is pretty grim. Glad I wasn’t staying although lots of passengers got off there. You can’t just base opinions on what a place looks like. It’s the people that count and Nuremberg’s history is pretty disturbing what with the carpet bombing and Sovietisation. It makes Coventry look picturesque! I was glad to get back into the beautiful countryside though. 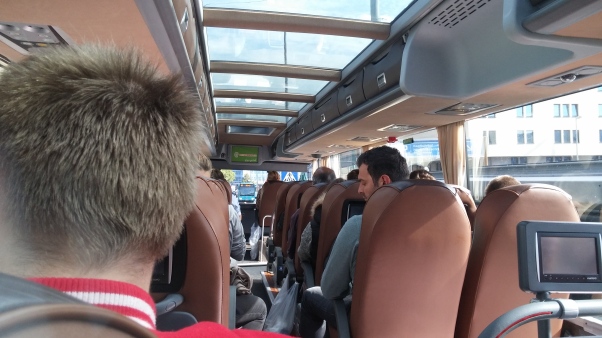 On the bus to Prague

Prague is a beautiful city. I think it was the nicest place I’ve been to on the whole trip. Again, it wasn’t good for busking because of punitive by-laws. You need a licence and can only play for an hour at a time. Some of the buskers on Charles Bridge were brilliant, among the best I’ve ever seen. There were two accordionists playing Bach fugues, perfectly! I decided not to go rogue, and didn’t busk!

Unfortunately, there were no street bikes to hire so I was back on foot. I went all over and was particularly impressed  by the Franz Kafka Museum. It didn’t have many exhibits but it presented itself as a kind of art installation and it gave a real insight into the work of Kafka, especially his novel, The Castle. It’s inspired me to revisit his work. 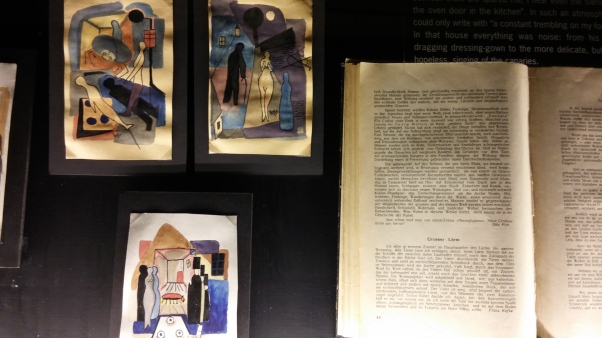 Kafka’s illustrations of The Castle.

That night I took my accordion to an open mic at The Red Room bar. This was very good and I made lots of new friends including a couple from San Francisco who were doing a European tour. They did a brilliant version of Voodoo Chile by Jimi Hendrix using acoustic guitar and voice. Check them out: The Jeff Jolly Band. 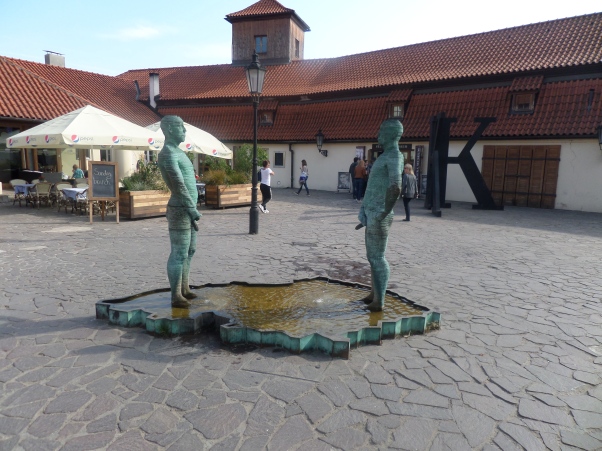 Next morning I was up early to get a bus to Berlin. This left at seven in the morning but I made it. It stopped at Dresden which is also a grim East German city that suffered terribly in the War. It made me realise how profoundly affected Europe was by the War, something I hadn’t really realised as a child growing up in Leicester which was relatively unaffected by bombing, although I did know about Coventry which was another beautiful city reduced to rubble! I went there as a child to visit the new Cathedral on a school trip.It was very memorable, especially the statue of Lady Godiva! What a terrible thing war is!

Berlin was my last stop and I only stayed there for a day before I went back overnight on the bus to Brussels. I went to a strange bar that night that had an open mic. It had a stream flowing down the bar! The barman didn’t think I was drinking enough beer. He was quite eccentric! It was mainly songwriters and the standard was really high. The atmosphere wasn’t as good as some of the places I’ve been to and I left early to make sure I got the metro back to the hotel before it shut down for the night. 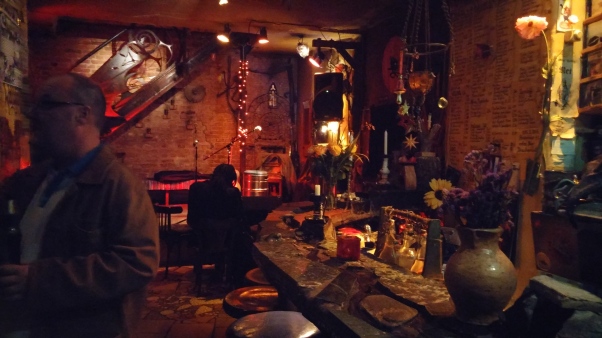 I had most of the day in Brussels before I got the train back to London so I decided to go to the Musical Instrument Museum and the Magritte Museum. Both were really interesting, especially the Magritte. I never realised a seminal surrealist could be so conventional and bourgeois! Still, I like his work! 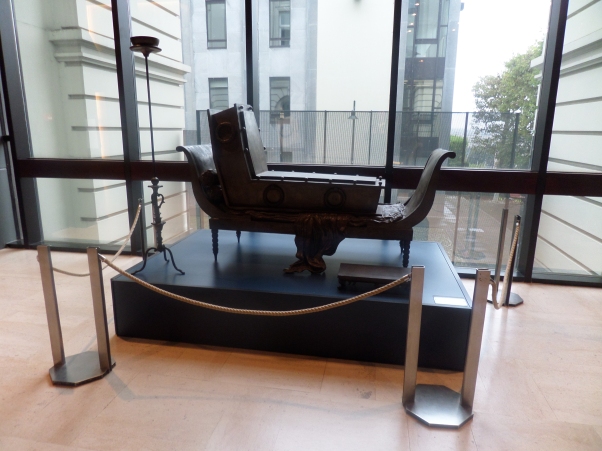 Outside, the riot squad are getting restless, they need somewhere to go..

Got back to London at 7 p.m. Adventure over, but there’ll be another one soon!