Well, I started off with such high hopes! You probably realise if you’ve read the last two posts that I was writing a diary in real time. Unfortunately once I got past Madrid that went out of the window and now I’m back in the UK writing a retrospective. A shame really because that was what I wanted to do and looking back on my last two posts it was definitely the right thing to do. I just didn’t do it! Well, there are reasons why but I won’t go into that now! Maybe next time!!

On the 8th I was on the way to Madrid but I didn’t stop there. Well, not for long. I arrived at the Atocha station which is one of the best buildings in Madrid. It’s amazing with a whole area that resembles a jungle. In the jungle is a pond filled with turtles. 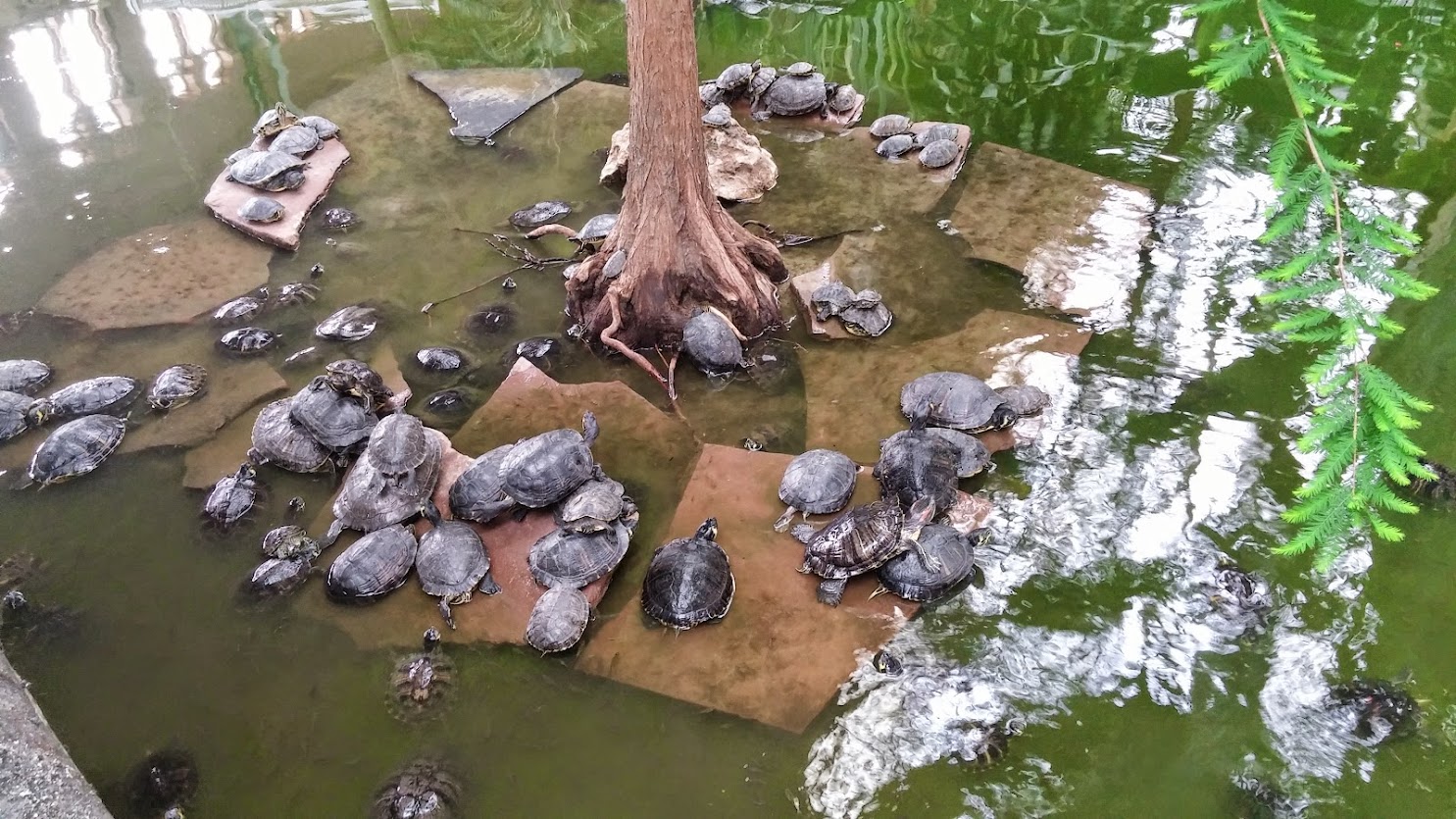 I didn’t want to stay in Madrid right then because that’s where I was flying back from on the 16th April so I was going to leave Madrid until the end. Where to now then. I decided on Salamanca, a place I’ve never visited which scores high on the must-see tourist barometer. I travelled on the Madrid underground (Metro) to the other big station Chamartin and got a train to Salamanca. A four hour journey because it wasn’t a high speed train. When I got to Salamanca I booked into an out of town hotel which was quite modern with proper showers and a lift. Luxury!! I immediately had two showers and wasn’t afraid to use the toilet!!

Like many Spanish cities the outskirts can be a bit off putting but that’s probably true of many places. The old town centre of Salamanca is an absolute delight full of grand, austere buildings. It’s an old university town that is reminiscent of Cambridge or York. I had a great time looking around their two cathedrals that are strangely joined together.

Salamanca Cathedral and Plaza. It rained all day so I bought myself an umbrella. It didn’t spoil anything though.

Another place worth visiting is the Art Nouveau museum. It has a wonderful display and the tearoom is lovely with the best cup of tea I had all the time I was in Spain. Also, in Salamanca, it is the first time I have seen storks nesting. They had taken over the tops of various church towers around the town. 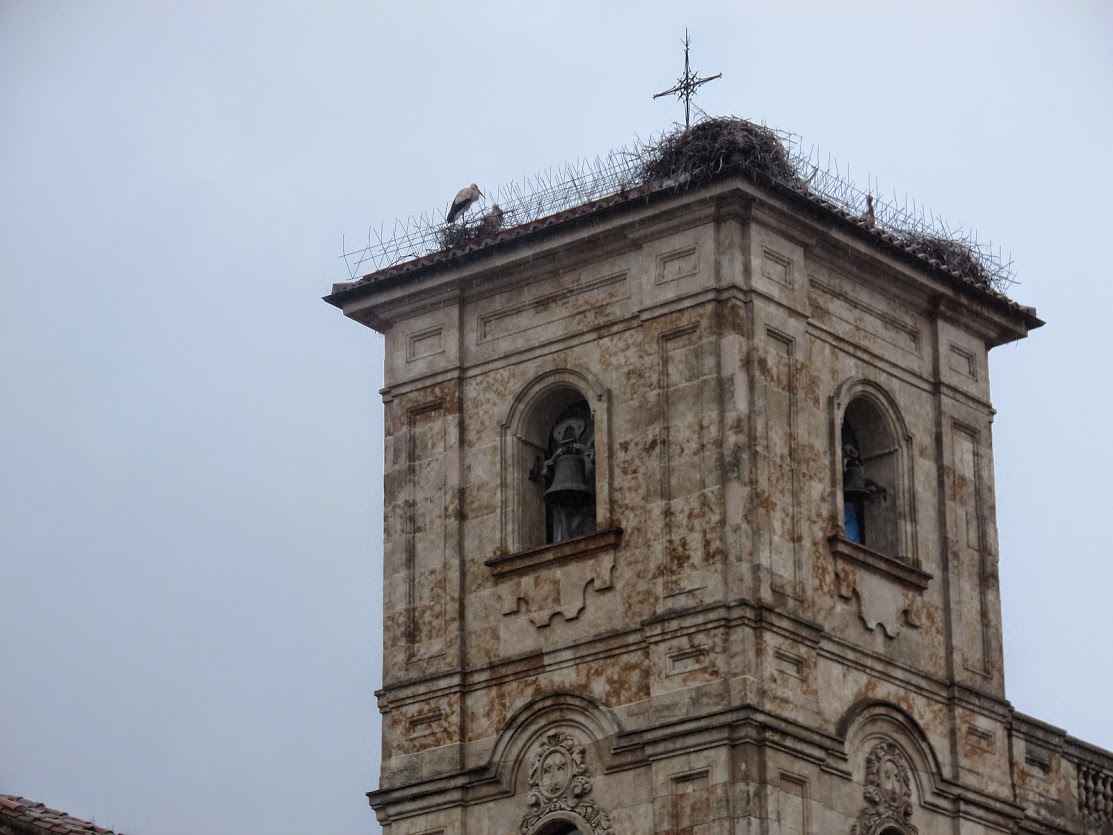 Storks nesting on a church tower.

When you get an Interail ticket you don’t have long to hang around if you want to make the most of it. I had five days travel to be completed in the space of ten. To use it, the most I could do was to stay two days in each place, which isn’t very long. In fact, I ended up only using four days. It was a load of fun but next time I won’t bother with Interail. You can do it cheaper and easier using last minute fares like you can with UK trains and air flights. It’s also more spontaneous because you don’t have to have separate reservations. You can use buses and aeroplanes as well. If you don’t mind where you’re going you can do it for next to nothing! Okay, that’s the next one sorted!

Next stop was Seville, a place I visited over forty years ago and I haven’t been back since. Would I recognise it? It certainly sticks in my mind as a lovely place with streets lined with orange trees (the sort that are too bitter to eat). I had to change at Madrid and cross town again. After about six hours total travelling I was walking the streets of Seville looking for the hotel I had booked, La Casa de la Luna. How romantic it sounded and, yes, it was in the old town down a narrow alley that looked a bit like heaven. 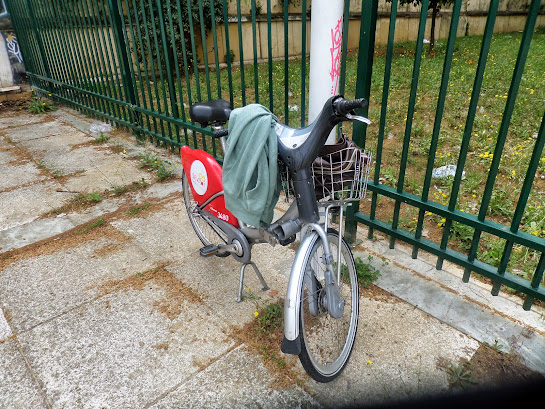 Seville bike with my hoody on the handlebars. The steering’s a bit heavy!

Seville is a fantastic place. It’s a real city with real people containing some of the best architecture and parks in the world. There’s a fairly pointless tram line which is fun and cheap but doesn’t go very far, but the best way to get round is by bike. For the first time ever I rented a bike from the stands scattered around town. They’re great! You can go where you want and park up, and you’re not left lumbered with the bike! It’s also quite cheap to use. Much easier than walking but the narrow roads full of pedestrians can be a bit of a problem. I had some near misses! 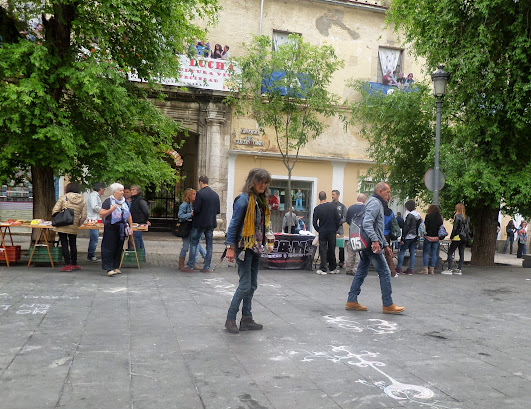 The highlight of my stay in Seville was a brilliant flamenco bar over the river. It was quite tricky to find and I can’t remember the name of it now! It was full of people and the atmosphere and music and dancing were spectacular. It’s fantastic that flamenco culture is still such a real part of the city. 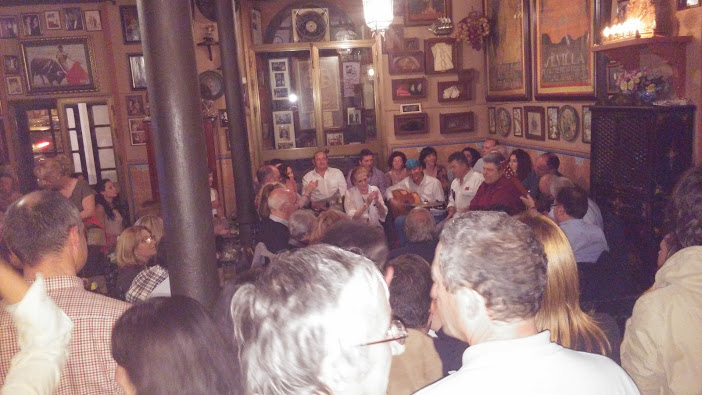 One of the problems of visiting so many places in such a short time is that they all start melting into one in my memory. Fortunately, the photos I took are dated so I know where they are taken otherwise I might have a job telling them apart. One place really stands out in Cordoba, though, and that’s the Cathedral. It is on the site of probably the most beautiful mosque in the ancient Arabic world. The Mezquita is one of the most spectacular buildings I have ever been to. It is a strange mix of Christian and Islamic architecture that tells it’s own story of years of strife and conflict based in the same country, but also of incredible artistic and architectural achievement. This building is one that everyone should see. The myriad arches and intricate Muslim designs impart a feeling of peace and tranquility that seems to be infinite. The Christian imagery appears almost violent in contrast with agonised pictures and sculptures of Christ on the Cross! 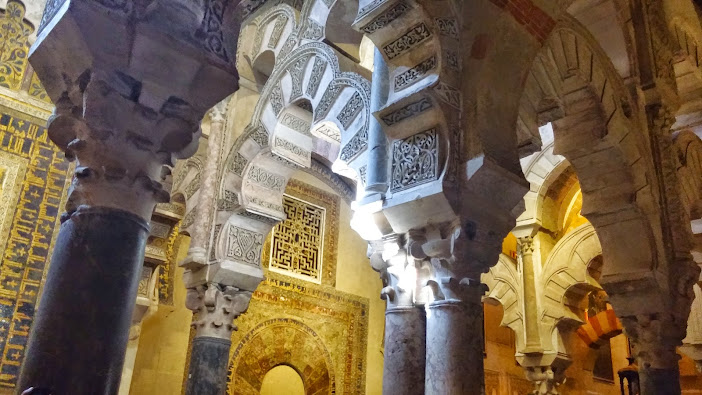 Towards the end of my trip I had to make some hard decisions. Should I go to Valencia and Barcelona again, eventually ending up in Madrid, or just go to Madrid and visit the famous town of Toledo for a day? I kind of wanted to get my money’s worth so Valencia would have made sense, and it would have been nice to go back to the Harlem Jazz Club in Barcelona for another blues jam. But I was already feeling a bit tired and that schedule seemed exhausting. Plus, there was also the hassle of booking (and finding!) hotels. As I’ve said, one of the most tiring things about this journey was acclimatizing to new places all the time. So, I decided on Madrid, with a day trip to Toledo which is fairly close. It meant I didn’t use all my travel days but I did keep my sanity!

If you’re not too fussy you can find hotels in Spain that are really cheap.  I stayed in a hotel in Madrid about 200 metres from the Atocha station and about 400 metres from the famous Prado Art Gallery for €30 a night. Unbelievable! It had the grand title of Hostal Rivera but it was quite hard to find because it wasn’t where Google maps said it should be. Also, there was no sign outside and the hostal was really just an apartment. It took about 15 minutes to get any one to open the front door!! Still, it was clean with good wifi and I could come and go as I wanted. What more could I want! The people who ran it were also very friendly. 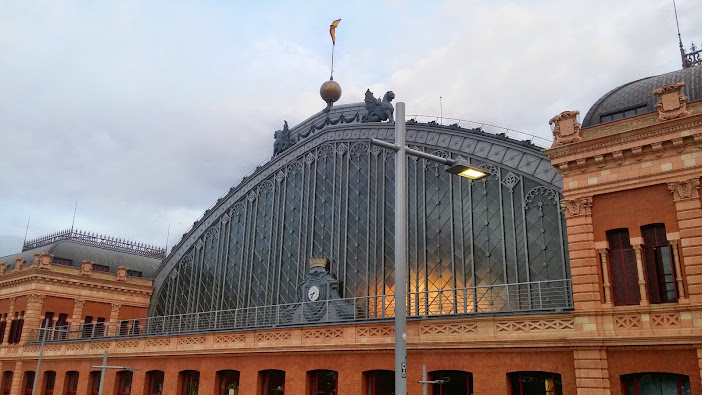 Next day I travelled to Toledo on the train. Again, this is a lovely place and I had a good look round but I think I was beginning to get Beautiful Town and City Syndrome, a condition that means if you see any more old buildings you have a physical and mental meltdown. It is an interesting place though. There is a Don Quixote walk which is fun. Also, there are two ancient synagogues which are both beautiful and sad, considering what happened to the Jewish population who had lived in Cordoba for hundreds of years. One of them has an interior which is startlingly like the Mezquita in Cordoba. 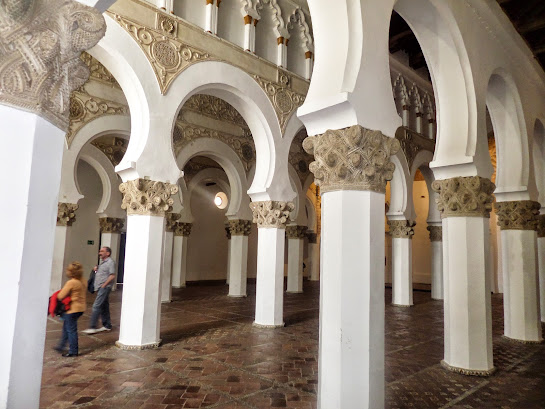 Synagogue in Toledo with similar arches to the Mezquita at Cordoba

To round off the trip. The day before I flew back from Madrid I went to the Prado Art Gallery one of the top art galleries in the world. It contains some amazing pictures. A whole gallery of El Greco’s and another of Goya. Perhaps the peak was seeing the original Garden of Earthly Delights by Hieronymus Bosch, a truly awe inspiring and surreal work from the 15th Century. Hieronymous Bosch “The Garden of Earthly Delights” in the Prado 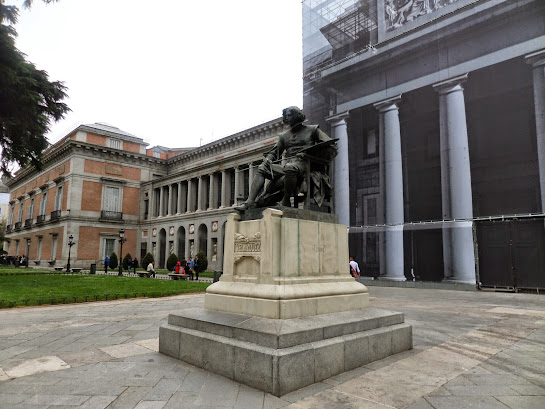 The Prado with a statue of Velasquez

On the last day I decided to stay in a hotel at the airport so that I didn’t have to go far for an early flight. Big mistake! I’d have been better off staying in my cheap hovel. There was a bus to the airport from the station that was cheap and quick. It would have been much better. Instead I went on a bizarre journey to the Madrid Airport Holiday Inn Express that involved buses, trains and walking along what I think was a motorway with cars racing by at great speed. What a nightmare! The hotel isn’t that near to the airport either and was in what seemed like a post-apocalyptical waste land, and it cost me €20 taxi fare to get to the terminal the following day. The room was nice though!