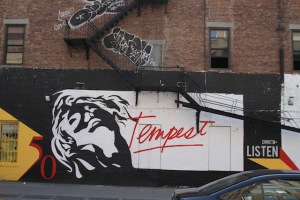 Graffiti ad for Bob Dylan’s Tempest. Is this the first time this has been done?

The other day I came across a review of this album on the Guardian web site. Written by Alex Macpherson it is almost totally negative. There is a link to it here:

The article shows an almost appalling lack of knowledge of one of the most important artists of the 20th Century, but compounds that with a total lack of understanding of what Dylan is saying and how he is saying it. Possibly Macpherson is deliberately being provocative but it is hardly an excuse for such ignorance and stupidity.

No, in my opinion having only heard it a few times, I think it is one of the best albums Dylan has ever made. Sure, his voice is a rasp but it is a supremely expressive and musical rasp. Macpherson implies that the lyrics look better on paper than when they’re sung. I think he can’t be listening to the same album as me because I would say the reverse. In fact, I think the lyrics are amongst the best he’s ever written but they still work best as songs.

At the moment I wouldn’t like to say exactly what many of the songs do mean but they are supremely evocative and conjure up a doom laden scenario with elements of self doubt and black humour. Like the best of Dylan the meanings change and shift with each hearing. At least two of the songs Scarlet Town and Tin Angel draw on traditional folk songs for their inspiration. I absolutely love Scarlet Town which takes the song Barbara Allen and turns it into an almost apocalyptic film scenario but still uses some lyrics from the original song. In some ways it is like an update of Desolation Row. The music and accompaniment to this are superbly atmospheric. Tin Angel uses the song Black Jack Davey and creates a twisted tale of jealousy and deceit that is almost cinematic in quality, again with a brilliant repetitive accompaniment.

I think it’s time the Dylan Can’t Sing Brigade pulled there head out of the sand and stopped complaining. Dylan is possible the most unique performer of the past sixty years who single-handedly changed what a pop song can be about! His position is unassailable and his new album is a towering achievement.