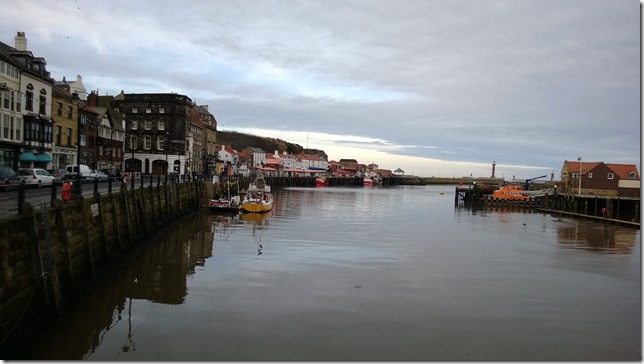 Late December I decided to go on a road trip to Whitby, North Yorkshire with my friend and fellow musician Steve Cartwright. It was a strange time to go perhaps. Not only was it very near Christmas but two weeks before we got there virtually the whole east coast experienced a “tidal surge” which left floods and destruction in it’s path. Whitby was quite badly affected with businesses closed down and houses flooded. Still, it was an interesting time. We spent five days playing, busking and attending pub sessions. I also had a walk up the steps to the famous ruined abbey and along the cliffs. Very interesting. As it turned out the abbey was closed but you could see it well enough from the footpath. Here are some photos I took of it:

We stayed at an apartment block that had been converted from an old windmill. It was quite posh and we spent most of the time worried about spilling things or leaving dirty marks on the walls. The locals called it “Teletubby Towers” on account of some strange bobbles on the roof and it’s generally ridiculous look. Very appropriate and amusing I thought. You could see it from all over the town. It didn’t look anything like a windmill! 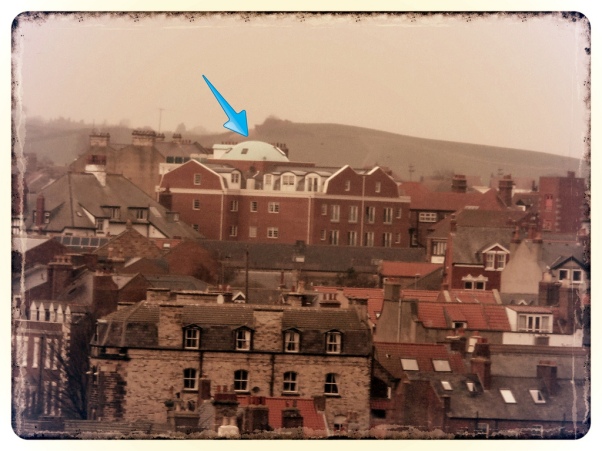 As it turned out the weather wasn’t too bad and the busking was fun although their weren’t many people about. We were joined by local musician Jonty who played the fiddle, guitar and ukelele and ran quite a few pub sessions in the town. One of the best ones was at the Dolphin and we had a really good time there. A bit stranger was a folk club at the Elsinore pub. Somehow I managed to get my guitar tangled in the Christmas decorations which caused the landlord to be deeply upset. The crowd running it seemed a bit cliquey as well. We left there in disgrace and went to the Angel and had a good time without upsetting anybody! I think most of the folk club crowd followed us to the Angel though and we were laughing, drinking and singing into the night!

I like Whitby. It is an authentic fishing town mainly unspoilt by tourism. The beach and cliff walks are amazing. I also like the fact that there are hardly any big shopping or cafe chains there like Tesco or McDonalds or Subway etc. There are some really nice old fashioned shops and cafes like Botham’s Tea Rooms which served some lovely tea and cakes. There are also TWO music shops where I bought some cheap harmonicas that worked pretty well. I played them at the sessions and really enjoyed it. Of course, Whitby is famous for having two successful folk festivals! It also has many fish and chip shops that are the best in the World, or so they say!!

Worth a visit is the Museum in Pannett Park. It is a private museum which has the same macabre Victorian atmosphere as the Pitt Rivers Collection in Oxford. There are weird dolls and some gruesome stories about whaling and a rather interesting fossil collection. Throw in some Samurai armour and moth-eaten stuffed birds and you get the idea!! 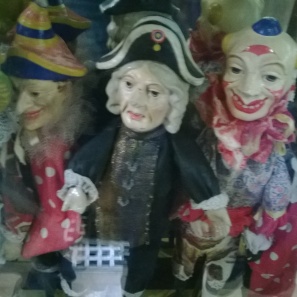 On the way back to Leicester we stopped off in Holmfirth and had a great session at a pub called The Nook. Jenny Carter joined us for this on fiddle and I’m sure we will be back to do some more gigs there. Great atmosphere!

Steve wrote a poem about a strange bush with blossoms growing in Pannett Park.

“WHO WERE YOU
Who were you whose sweet and aromatic scent
Pervaded Whitby’s winter lanes
When last we went aplodding
Down into her cosy town
And sought her roaring,crackling fires.
Like Spring you came upon us as we trod
And called us o’er to find your source.
And there behind the water pump and tucked behind the four by four
You stood,
Pink blossoms hanging on a waxy crown of stem
And
When you’d drawn us in
You cast your scented nets
And caught us in some wondrous trance
And hauled us in.
Bemused we took your sprig
And thread it through our buttonholes
To keep the spell
And linger lost within your gorgeous scent.
What prompted you to come so early in the year?
Or are we duffers
Unaware of who you are or whence you came
Or when you should
Or are you early are you late?
Well not for long.
For I shall seek you out tonight
Within my library of floristry
And keep this memory of you e’er close within my heart
To be repeated often
Like a favourite poem
Or a very special song.”

My photo gallery of Whitby: