This is an account of the Harmony which was an all night cafe in Soho. It is famous for being the meeting place of the earliest modern jazz musicians in England as well as some of the most dubious “wide-boys” and gangsters of London!

One of the earliest jazz clubs in the UK was run by the clarinetist Cy Laurie. Born in London in 1926, Cy was an admirer of New Orleans clarinet player Johnny Dodds and would claim to be the reincarnation of Dodds, even though Dodds was alive while Cy was a teenager.

Cy had previously run a small weekly club at the Seven Stars in Bow, but in the early 1950s he started up the club for which he would become so well known. Cy Laurie’s Jazz Club became a focal point for live traditional jazz for most of the decade and was renowned particularly for its all-night raves. 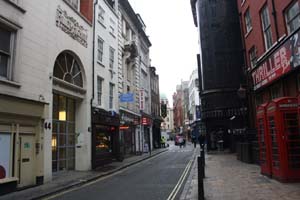 The club was in the basement of 41 Great Windmill Street opposite the Windmill Theatre in London’s West End. During the day, the space was used as Mac’s Rehearsal Rooms. Many jazz musicians used the rehearsal rooms at that time – if you were living in a flat or a bed-sit, you needed somewhere to practise or rehearse to avoid disturbing the neighbours. There was a nightclub on the ground floor and a boxing gymnasium on the first floor. An obituary for Cy Laurie in the Daily Telegraph newspaper (click here) describes the setting as: ‘Dark and intimate, with a dance floor surrounded by dilapidated sofas, these premises held an irresistible bohemian appeal for the young people from the suburbs who flocked to the club’s “all-nite raves”’.

Above: 41 – 44 Great Windmill Street in 2011 opposite The Windmill. Ham Yard is a little further up on the left, and Archer Street opposite Ham Yard on the right.

There is an excellent description of the club on the website Classic Cafés (click here). The page is primarily about the Harmony Cafe in Archer Street but says of Cy’s Club: ‘Situated in scruffy Ham Yard, at the junction of Great Windmill and Archer Street, it was entered by going through a set of doors it shared with a strip-club and a boxing gym. (Ham Yard was used by the street traders of Rupert Street to store their barrows.) A dingy staircase descended into a vast basement that was used as a dance rehearsal room during the day. There was little in the way of décor, just hardwood floors and a few dilapidated sofas, alongside minimal lighting and a PA system that worked only intermittently. Later on it became the most iconic club of the Mods in the early 60s The Scene, which became the model for many other clubs throughout the U.K. e.g. the Nite Owl club in Leicester. 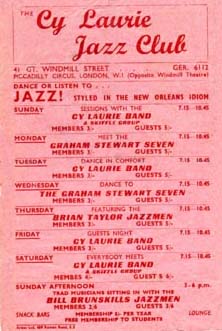 Steve Fletcher has sent us this programme for the Cy Laurie Jazz Club in 1956. You can see from the programme that in 1956 jazz was on the menu every day of the week from 7.15 pm to 10.45 pm and if you were a member you could get in for 3/- (was that 30p?). Steve says: ‘I have lots of memories of the Cy Laurie club. I spent so many evenings there that eventually the manager gave me a job on the door. It was simply the best ‘trad’ club in London from 1953 – 58. Why? Not because it had the best music – we teenagers at the time could not really make reasoned judgements about whether Cy’s band was that much better than Ken Colyer’s or Humph’s. In all of the clubs you just went in to jive – and to try to pull a chick – and Cy’s had the best chicks, mainly from St Martin’s Art School. Cy’s, certainly at weekends, was packed to capacity, and personally I never left without a different bird on my arm. Humph’s was for tourists and Colyer’s for purists but Cy’s was for jiving and raving.’

‘The place itself was a dump, a grubby basement rehearsal room with no decent furniture, clapped-out P.A., filthy toilets and a lousy little tea bar – but the arty bohemian mob loved it like they loved the French coffee bar in Old Compton Street. Ironically Cy, himself was a very straight guy – aesthetic vegetarian, non smoker or drinker, and a total disciple of Johnny Dodds who would not compromise to cash in on the ‘trad’ boom. I was never really a ‘trad’ fan – at home I was listening to Mulligan and Kenton – but I would never miss a Friday, Saturday or Sunday night at Cy’s – for half-a-crown’s worth of unbridled noise, smoke, sweat-laden jiving and – what all young men are looking for…’

This photograph of an all-night session at the Cy Laurie Club in March 1956 is by Magnum photographer, David Hurn. It was used widely to advertise an exhibition at the Photographers’ Gallery in London in 2008 – Soho Archives 1950s and 1960s. You are 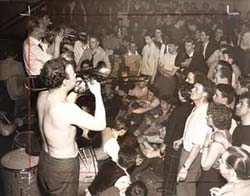 able to see this and other images of Soho by clicking here.

There are two recollections of the Club on the History Is Made At Night web blog that help in describing Cy’s Club and the scene at that time (click here). The blog quotes the source of the recollections as being http://www.jazzhouse.org/com, but that website no longer seems to have the information.

‘The Windmill Street club was the Saturday Night magnet in my late teens; it was the music and the atmosphere, but also the place to find out the address of that week’s rave; there were five of us, and between us we could muster three cars – unusual in those days – which ensured that we always gathered passengers who knew the ropes. On one then celebrated occasion, four of us went to Manchester, at the drop of a hat in an Austin A35, by the time we got there it was all over, so we returned to London with an extra passenger, who had been given a trumpet which he taught himself to play on the journey’ (so years before the late 1980s London orbital parties, the convoy of rave pilgrims was established).’ 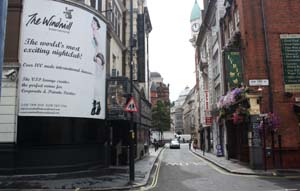 Great Windmill Street with Ham Yard to the right in 2010

‘All nighters at Cy’s were a buzz. I was one of the – all dressed in black and often barefoot – dancers who was first AND last on the floor…. Cy’s place was a culture thing, and included the early morning rush to Waterloo station to get the Milk Train to Hastings, for “FUN” in the Hastings caves’. Others would stumble into the Harmony Inn cafe in Archer Street. By the end of the 1950s, Laurie had moved on to India to study with the Maharishi Mahesh Yogi, beating the Beatles to it, while revivalist jazz had been superseded by the trad jazz boom and a new crowd of ravers.’

Archer Street was just round the corner from Great Windmill Street and it was there that musicians would meet in the street outside the Musicians Union office making contacts for gigs.

In 1958 a film was made to advertise the Ford Thames Van range. Called Band Wagon, it is a valuable piece of film in that features some rare footage of the Cy Laurie Jazz Band. Here is the video.

Steve Fletcher has identified some of the musicians: Cy Laurie -clarinet, Colin Smith – trumpet, Terry Pitts – trombone, Stan Leader – bass … but who are the drummer and banjo player? (Chris Mitchell tells us that the drummer is Ernie O’Malley and the banjo player is Tim Streeton).

Norman comments on the video of the Cy Laurie band:

‘I suspect that the banjoist is Tim Stretton and the drummer Ernie O’Malley. The band had a pianist at the time, Ron Weatherburn, but he obviously couldn’t fit in the van – so it wasn’t all that great a bandwagon!’
4.2011