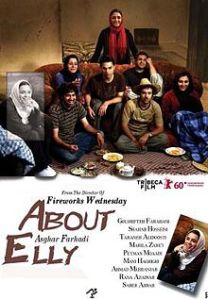 I went to see this film this week at the Phoenix Square Cinema, Leicester. It is a very impressive picture. The cast are very natural and believable. It is directed by Iranian director Asghar Farhadi who creates a mystery tale that deals with well intentioned deceit and lies. This is the plot outline:

A group of middle-class Iranian friends travel to the shores of the Caspian Sea on a three-day vacation. They are former classmates at the Law faculty in the university. Three couples include Sepideh and her husband Amir who have a little daughter. Shohreh and her husband Peiman who have two children including their little son Arash. Nazy and her husband Manoochehr are the third family. The trip is planned by Sepideh, who brings along her daughter’s kindergarten teacher Elly in order to introduce her to Ahmad, a friend who has come back from Germany to get married.

They all go to the villa that Sepideh has booked from Tehran, but the rural woman in charge tells them that the owners of the place were going to come back the next day, so they wouldn’t be able stay there. The old woman suggests that they stay in a deserted villa that needs a lot of repairs. There would be no cellphone reception there and they would have to go to the old woman’s house in order to make calls. Sepideh lies to the old woman about the relationship between Elly and Ahmad: she says they’re married and are there for their honeymoon.

Elly is a bit shy, but she begins to feel attracted to Ahmad, who seems to feel the same. She calls her mother and lies to her saying that she’s with her co-workers at the sea-side. She wishes to go back to Tehran the following day, as planned. Sepideh does not want her to leave and hides her luggage. In a twist of events, Elly goes missing after one of the mothers asks her to watch the children playing in the water. The group does not know whether Elly drowned or left for Tehran on her own.

It is interesting, considering media representations of Iran, how ordinary the participants are. They could be a group of people from America or Europe visiting the seaside. It shows the importance of World Cinema in breaking down stereotypes. Many people’s views of Iranian society are probably of mad jihadists and women in burqas. This is far from the truth. The film does deal with things like honour but in a totally comprehensible way. It is both a riveting mystery tale and an exploration of guilt and lies. Highly recommended!

One thought on “Film Review: About Elly”