This obituary is so good with so many interesting links that I have decided to repost it here. The complete movie of “Tonight Let’s All Make Love in London” is stunning! 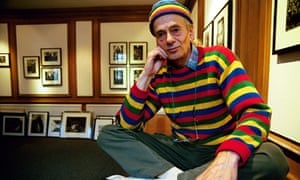 John “Hoppy” Hopkins, who has died aged 77, was one of the best-known counterculture figures of London in the 1960s, not just as a photographer and journalist, but as a political activist. He was the co-founder of at least three underground projects: International Times magazine; a fabled but short-lived music venue called the UFO Club; and the London Free school, a community-based adult education initiative. During the couple of years up to June 1967, when Hoppy was jailed for cannabis possession, Britain’s fertile and diverse counterculture took much of its inspiration from him, and he was the closest thing the movement ever had to a leader.

Son of Victor and Evelyn Hopkins, John was born in Slough, Berkshire; his father was a naval engineer. After attending Felsted school, Essex, he took a general science degree at Emmanuel College, Cambridge, receiving his MA in 1958. As Hoppy put it, he discovered sex, drugs and jazz at Cambridge and pursued all three with great diligence. After graduation, he worked as a lab technician for the Atomic Energy Authority at Harwell, but lost his security clearance following a jaunt to Moscow for a communist youth festival.

In 1960, he moved to London and became a photographer. I first encountered him backstage at the 1964 Blues and Gospel Caravan, photographing Muddy Waters and Sister Rosetta Tharpe for Melody Maker. His photographs are among the most evocative of the era, including brilliantly insightful shots of Beatles and Stones, John Lee Hooker and Thelonious Monk, as well as an early 60s underbelly of tattoo parlours, bikers, fetishists and derelict architecture. They are gathered together in the book From the Hip (2008). 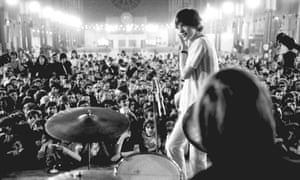 The Rolling Stones performing at the All Night Rave in 1967. Photograph: John ‘Hoppy’ Hopkins/Redferns

In the summer of 1965, Hoppy joined Barry Miles (future biographer of Allen Ginsberg and William Burroughs) and the poet Michael Horovitz to organise the first of the events that went on to be known as the Poetry Olympics at the Royal Albert Hall, London. It featured Ginsberg, Lawrence Ferlinghetti, Christopher Logue and many others; that night, the standing-room-only audience recognised themselves for the first time as a counterculture.

Two months later, Hoppy started the first of a lifelong series of projects to democratise communication and information. The London Free school, based in Notting Hill, achieved few of these goals, but its cash-raising events gave Pink Floyd its start and Hoppy’s inspired collaboration with the local West Indian community helped bring about the first annual Notting Hill Carnival.

In October 1966, he and Miles published the first edition of International Times, Europe’s first underground paper. The IT launch party at the Roundhouse – with music by Pink Floyd and Soft Machine – inspired Hoppy and me to open the UFO Club in a West End dance hall. Every Friday, Hoppy would sit atop a scaffold at the back of the club, playing records, making gnomic announcements, showing films, and projecting light shows; he imbued those nights of music, theatre and dance with an unforgettable atmosphere.

In response to a police raid in March 1967 on the IT offices, Hoppy mounted the 14 Hour Technicolor Dream, a fundraising concert at Alexandra Palace; Peter Whitehead’s film of the event, Tonite Let’s All Make Love in London (1967), shows a dazed John Lennon wandering in the huge crowd, transfixed by Yoko Ono cutting a paper dress off a girl as Pink Floyd greet the north London sunrise. 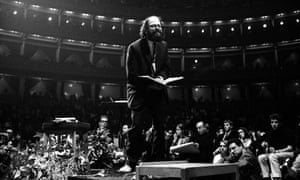 Revolutions are, almost by definition, factional, but during those golden years, the working-class anarchists, vaguely aristocratic bohemians, musicians, crusaders, poets and dropouts were united in their respect and affection for Hoppy. That he was seen as leader of this amorphous movement espousing recreational drug-taking, political protest, sexual liberation and “obscene” literature led to his downfall. Hoppy’s flat was raided and a small amount of hashish found.

At his trial, he attacked the prohibition on drugs and, having been branded a “menace to society” by the judge, was handed a nine-month term in Wormwood Scrubs. Outrage at the sentence inspired ubiquitous Free Hoppy graffiti as well as a full-page celebrity protest in the Times, paid for by Paul McCartney. Without him, UFO lost its way and closed by October; the scene he had inspired was reduced in his absence by internal bickering, police harassment and better-funded competition.

Though prison drained his energy for leadership, the following decades saw Hoppy persevere with his ideals. Inspired by the Paris events of May 1968, he and Miles converted IT into a workers’ co-operative. He started Bit, an information service, and continued to review and give advice on drugs in IT, under the pseudonym Bradley Martin.

Tonite Let’s All Make Love in London, 1967, by Peter Whitehead

With his partner, Sue Hall, in 1969 he formed Fantasy Factory, a facility that revolutionised lowtech video editing, bringing it within reach of community activists and independent directors. Unesco funded Fantasy Factory’s educational package and distributed it widely in the developing world. A chance meeting in 1990 led to Hoppy designing and constructing a greenhouse for horticultural research at the University of Westminster.

Diagnosed with Parkinson’s disease in 2007, he never lost his curiosity or his charm. In his final months, though his speech and movement were severely hindered, he was still able to open wide his brightest eye and say “wow.”

A marriage to Susan Zeiger (aka Suzy Creamcheese) in 1968 ended in divorce. Hoppy is survived by his sister, Marilyn.
Joe Boyd