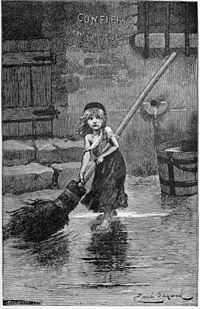 Original illustration from the book of Cosette. Notice the huge broom held by the tiny girl. This image has been used extensively to promote the musical and the film.

It had to be done. I had two free tickets for Showcase Cinema De Luxe, Leicester last Sunday. Haven’t seen the Hobbit yet or Jack Reacher but I decided to opt for Les Mis. The reason for this isn’t because I’m a big fan of the musical. I’ve never seen it! I’ve been intending to see it for the past thirty years but never made it! I’m going to make a special effort now though. No, the reason is that it is my favourite book of all time. Written by Victor Hugo in the 19th Century it is a literary tour de force, one of the best books ever written.

It is incredibly long, over 1500 pages in English and covers a multitude of things. You find out about the Paris sewer system, the language (argot) of the Parisian underclass, discussion about Napoleon and the monarchy and many other things. The main story though is that of Jean Valjean and his progress from criminal and convict to prosperity as a business man and factory owner and eventually as a benefactor and saviour of Cosette, daughter of a woman who works in his factory, Fantine, who falls on hard times and dies. While all this is happening Jean Valjean is pursued by police inspector Javert who becomes convinced that the mayor is in fact the same man as Valjean who had broken his parole years before and needed to be arrested and put back in gaol. The reason for breaking his parole is missing from the film and is quite an important omission. After getting away with stealing the Bishop’s silver he steals a small amount from a young, poor boy. He becomes totally disgusted with himself and tries to find the boy to give it back but can’t find him. The boy reports it to the police and that is how he broke his parole. This is why Valjean feels that Javert is justified in pursuing him!

The story is quite melodramatic although brilliantly told and is similar to the kind of themes used by Thomas Hardy and Balzac. The characters are very well drawn and serve to bring out the moral ambiguities of the story. Javert is possibly the most interesting character. Although he appears to be remote and cruel and obsessive, his motives are born out of total honesty and respect for the law. Jean Valjean actually respects this about him even though his aim is to bring him down.

Later on the narrative becomes about the love story between Cosette and young middle class revolutionary Marius who is rescued by Valjean from the barricades of the 1832 rebellion against the restored monarchy. This is NOT the French Revolution as many people think but an event that might have been forgotten were it not for it’s inclusion in the book of Les Miserables. It was a storm in a tea cup. At the end of the story both Javert and Valjean, in very different ways, experience a kind of redemption and the world is left a better place. Apparently, Hugo based the two characters on the same person and this is a reason why they are so intrinsically linked. They are two sides of the same man.

In many ways the film is very good and it has really affected audiences emotionally. It is impossible to make a film of the book without seriously compromising the story in many ways but the basic meaning of it remains. I would say the second half is much better than the first although there are some strong episodes in the first like the opening galley scene and Fantine’s rendition of I Dreamed a Dream. I found this very powerful even though the song has become devalued and over familiarised by the Subo and X Factor effect (or was it the other one. Can’t remember!). Anne Hathaway’s performance as Fantine is astonishing! Despite winning Golden Globes recently I think Russel Crowe and Hugh Jackman are miscast. I think Crowe would have been better as Valjean and Jackman as Javert. An earlier French version had Gerard Depardieu as Valjean and John Malkovich as Javert. This is a superb version and worth seeing if you can get hold of it. Somehow I ended up with a DVD of it that had been given away free with the Daily Express and I have never knowingly bought the Daily Express so I don’t know where I got it from! It is a condensed version of a TV series and gets very close to the original story with some brilliant performances.

Seeing the recent film has renewed my interest in seeing the live theatre production. Film rarely captures the atmosphere and excitement of a live show but, with the live singing on set which is a first, this film is moving in the right direction. Although flawed I think this film is well worth seeing.